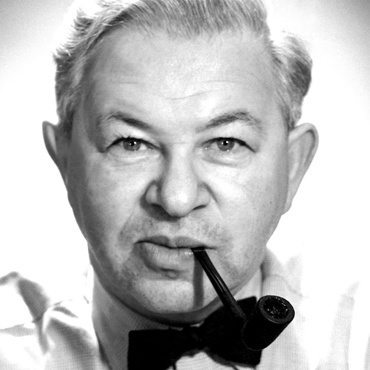 Arne Jacobsen, born in Copenhagen in 1902, endures as a true visionary of modern architecture and design and a prominent leader of Danish Modern design. Schooled as a mason at the Technical School in Copenhagen, Jacobsen later expanded his construction knowledge, becoming an architect at the Royal Danish Academy of Arts. Fleeing Denmark in 1943 to escape the German occupation, Jacobsen worked in Sweden before returning to his homeland in 1949.

Perhaps it was his “hands-on” experience as a mason that caused Arne Jacobsen to develop the attention to detail at every level of new construction for which he is known. As an example, his winning design for the House of the Future contest in 1929 exhibited extraordinary detail as he and collaborator Flemming Lassen designed not only the outside structure, but also all of the interiors, including furniture, textiles and color palettes.

Jacobsen rose to international fame after the debut of his famous “Ant” chair, an evolution of a chair he created for the Munkegard School near Copenhagen. The “Ant” chair, a 3-legged stackable chair with a seat and back of contiguous molded plywood, subsequently evolved into the successful four-legged “Series 7” chair introduced in 1955.

For other architectural projects, Arne Jacobsen was known to have created not only furniture but also minute design details such as flatware, lights, sinks, taps, door handles, and even locks and keys, earning him the reputation of a meticulous perfectionist. One such project, the Radission SAS Hotel in Copenhagen, yielded several well-known classic designs, including the ever-popular “Swan” chair, a single upholstered sculptural design beautifully representing his own take on organic modernism. As well, yet another example of Jacobsen’s forward-thinking, the flatware he designed for the SAS was selected for use in the movie classic “2001: A Space Odyssey” because of its futuristic design.