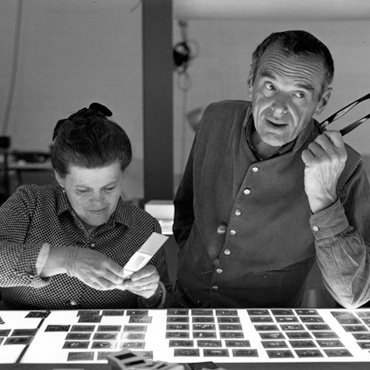 Charles Ormond Eames, Jr. and Bernice Alexandra “Ray” Eames were American designers who made major contributions to modern architecture and furniture, as well as graphic design, fine art and film.

Charles Eames briefly studied architecture at Washington University in St. Louis on a scholarship, but left after two years – rumor reports the university dropped him because his views were “too modern.” In 1938, Eames moved to Michigan with his wife to continue his studies at the Cranbrook Academy of Art, where he met Ray Kaiser.  After divorcing his wife in 1941, he married Ray and the couple moved to Los Angeles, were they worked and lived for the rest of their lives.

Throughout the 40s and 50s, the Eames continued their work in architecture and modern furniture designs, creating many iconic pieces including the fiberglass and wire mesh chairs they produced for Herman Miller.

In 1949, the Eames constructed “Case Study House # 8” for Arts and Architecture Magazine.  The house was built on a cliff overlooking the ocean and was hand constructed in a matter of days entirely of pre-fabricated steel parts intended for industrial construction. The Eames home still stands as a milestone of modern architecture.

FormDecor’s special selection of the Eames’ classic designs are available to rent HERE.