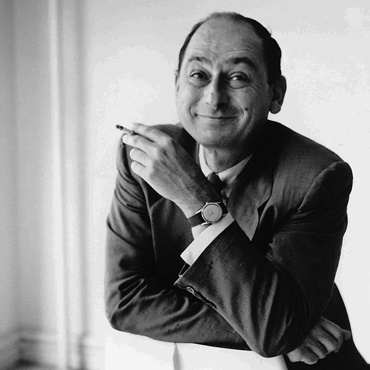 George Nelson was an American industrial designer, and one of the founders of American Modernism.  As Director of Design for Herman and owner of his own design studio, George Nelson Associates, Inc., Nelson was responsible for many of the 20th century’s most iconic modernist furniture designs.

George Nelson attended Yale University, and happened upon the architecture school because of a rainstorm, ducking into the building in order to stay dry. Walking though the building, he came upon an exhibit of students’ work entitled “A Cemetery Gateway”.  Prior to this, he had no interest in becoming an architect! He graduated from Yale in 1928 with a degree in architecture, after gaining recognition during his undergraduate years working as a drafter at Adams and Prentice and in publications such as “Pencil Points” and “Architecture” magazine.

In 1931, after receiving a second bachelor’s degree in Fine Arts from Yale, Nelson was awarded the Rome Prize, which was a year studying architecture with a heavy stipend and accommodations in a palace in Rome. Nelson traveled through Europe, where he met a number of modernist pioneers, including Mies van der Rohe, Le Corbusier and Gio Ponti.

George Nelson went on to contribute as an editorial staff member of Architectural Forum magazine in 1935 where he continually defended the modernist principles. During this time Nelson spent a great deal of time interviewing and exchanging ideas with the other founders of the modernist architecture movement of the forties, including the Eames, all of whom he would later collaborate with.  By 1940 George Nelson had authored a book with Henry Wright, “Tomorrow’s House”, in which he introduced modern concepts such as “the family room”, and “storage wall.” After reading the book, Herman Miller Chairman D.J. Dupree selected Nelson to be the company’s director of design.  Despite having no experience in furniture design, Depree hired Nelson based on his insight into creating furniture that was innovative and useful. Over the years, Nelson’s work with Herman Miller would include some of the most iconic furnishings of the 20th century including the Eames, Harry Bertoia, and Isamu Noguchi in it’s catalogue.

Using the money he earned at Herman Miller, Nelson opened George Nelson Associates, Inc. in New York City, where he once again brought together some of the top designers of the era, and by the time the company closed in the mid-1980s, it had worked with most of the Fortune 500 companies of that time.