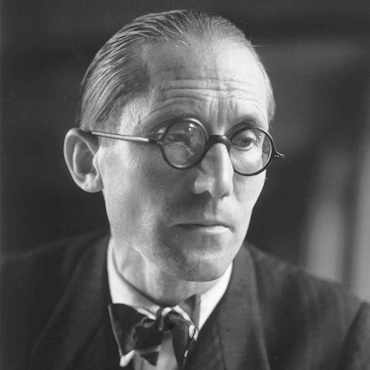 Born Charles Edouard Jeanneret in Switzerland, Le Corbusier is the pseudonym he gave himself while writing in Paris in 1920, an expression of his belief that any man could reinvent himself. Though Le Corbusier was very successful in his first career as a watch engraver, he felt compelled to follow his interest in architecture, leaving Switzerland in 1907 to study in Italy and Paris. From there, Le Corbusier developed his varied interests in art, architecture and design theory, becoming a major influence on the Parisian art scene in the 1920’s.

Through his work as a designer and writer, Le Corbusier was a significant player in the shaping of the International Style of the early 1900’s, and his idealistic theories of urban planning had a major impact on city planners worldwide. In furniture and architectural design, the minimalist modernism that he espoused was a manifestation of his belief that the home is ideally a “machine for living”. An outspoken advocate of the use of industrial techniques and strategies as a means to transform society for the better, Le Corbusier frequently incorporated these ideas into his designs, furthering his notion of the home as a “machine”. His furniture line “Equipment for Living”, a series of tubular steel furniture designed with architect Charlotte Perriand and his cousin Pierre Jeanneret, remains as some of the most iconic representations of the International Style.

Upon his death, Le Corbusier was memorialized worldwide, prompting the President of the United States to proclaim, “His influence was universal and his works are invested with a permanent quality possessed by those of very few artists in our history.”