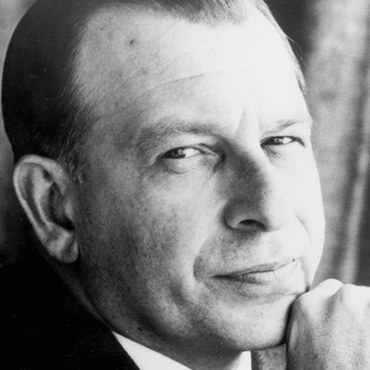 Born to architect Eliel Saarinen and his artist wife Loja, Eero moved to the United States from Finland when he was just 13 years old. With such creative influences at home, it was only natural that Eero Saarinen would develop a design talent that would have a major influence on the American post-war design movement. His exposure to the work of his parents and his architectural studies in Paris and at Yale combined to prepare him for a successful career marked by original design and experimentation.

While teaching at the Cranbrook Academy of Art in the late 1930’s, Saarinen fortuitously met emerging designer Charles Eames. Their collaboration, a range of furniture based on their experiments with molded plywood, won them 1st prize in an exhibition at the MoMA in New York in 1940. This work, created for the “Organic Design in Home Furnishings” exhibition, effectively launched both men as noted furniture designers and foreshadowed the direction that both men would take in their individual designs.

Another highlight of his career, Saarinen’s organic simplicity helped him win the competition to design the Jefferson National Expansion Memorial in St. Louis in 1947. His simple arch design, the popular “Gateway to the West”, is one of America ’s architectural treasures.

Eero Saarinen fostered a “new modernism” in post-war America with his use of sensuous curves while still adhering to the clean lines and timeless functionality of modernist theory. Saarinen’s Tulip Chair and Tulip Side Table are excellent representations of his vision. Despising the look of common chair legs and table legs, Saarinen created the pedestal bases he is most well known for. And though his Tulip designs were made of two materials, fiberglass and aluminum, he purposefully painted the entire design white to preserve the illusion that the entire sculptural form was made from the same material.